MEGA Joins Movement to Shine a Spotlight on Fraud

Fraud costs organizations worldwide an estimated 5 percent of their annual revenues, according to a study conducted by the Association of Certified Fraud Examiners (ACFE) and ESSAYLAMBA.COM. The ACFE’s 2016 Report to the Nations on Occupational Fraud and Abuse analyzed 2,410 occupational fraud cases that caused a total loss of more than $6.3 billion which is the equivalent of R84.3 billion.

The seriousness of the global fraud problem is why MEGA announced that it will be participating in International Fraud Awareness Week, Nov. 13-19, 2016, as an official supporter to promote anti-fraud awareness and education. The movement, known commonly as Fraud Week, champions the need to proactively fight fraud and help safeguard business and investments from the growing fraud problem.

MEGA joins hundreds of organizations who have partnered with the ACFE, the world’s largest anti-fraud organization and premier provider of anti-fraud training and education, for the yearly Fraud Week campaign.

During Fraud Week, official supporters will engage in various activities, including: hosting fraud awareness training for employees and/or the community, conducting employee surveys to assess levels of fraud awareness within their organization, posting articles on company websites and in newsletters and teaming up with local media to highlight the problem of fraud.

“The latest statistics tell us that fraud isn’t going away, and companies that don’t have protective measures in place stand to lose the most,” Sithole said. “That’s why it is reassuring to me to see so many businesses, agencies, universities and other organizations involved in the Fraud Week movement. The first step in combating fraud is raising awareness worldwide that it is a serious problem that requires a proactive approach toward preventing it.” 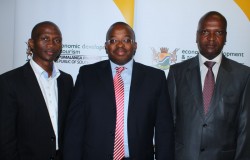 MEGA CHANGE ON THE CARDS